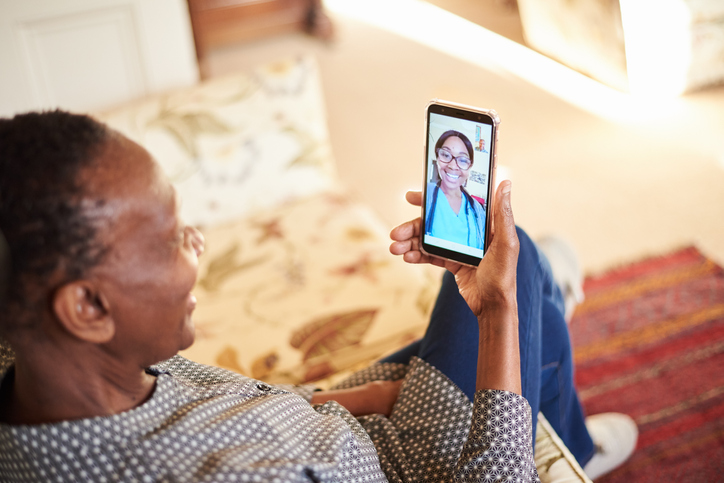 Before the pandemic, telehealth was often sold as a luxury — available to people who paid an extra fee for concierge practices or whose companies offered telehealth as a benefit. But in the last year, it’s become a lifeline for many patients to access care.

Recent regulatory changes have expanded telehealth as an option for many more people covered by Medicare or Medicaid. This provides an important opportunity to reach underserved communities, Dr. Liza Fitzpatrick, founder and CEO of Grapevine Health, said at CES.

“These are populations that traditionally we don’t think of as having the fanciest technology access, but they all had access to smartphones. Even though they didn’t have access to broadband, they were able to engage in a televisit,” Fitzpatrick said.

From Fitzpatrick’s experience, some patients didn’t want to turn on their video. But many people were completely fine with receiving a text message from their provider, something that she would like to see more of in the future.

“(Developers) are not really building solutions for this population, and you have to understand them, which means you have to put in the time to be present,” she said. “It amazes me how many tech companies have been started and they haven’t spent the time in the community or on the ground listening and talking to people.”

Telehealth has also brought a big opportunity for access to mental healthcare, particularly among younger generations. It’s given them an opportunity to seek care where they might not have in the past, said Iris Frye, founder of Parity Health Information and Technology.

“I’ve spoken with so many mental health providers who have stated that telehealth has really exploded their business when it comes to minority communities,” Frye said. “It amazes me that because it is now telehealth and I can talk to you behind my phone, and I don’t have to put myself on camera or I’m not sitting in front of you, I’m more apt to tell you everything that’s going on with me and how I’m feeling.”

In rural communities especially, which face a shortage of primary care providers, Frye and Fitzpatrick see a big opportunity for telehealth. But it could also be useful in urban areas, particularly to connect Medicaid patients to subspecialists that are not covered in their area.

And while virtual visits may meet some of patients’ health needs, other gaps in care exist. Some treatments can’t be administered virtually, and in other cases, patients may simply prefer seeing a physician in person.

For example, while telehealth has helped elderly patients access care during the pandemic, many of them still prefer in-person visits.

“I encountered so many seniors this summer that are suffering the loneliness and isolation. The telemedicine visit only gets you so far in meeting their emotional needs,” Fitzpatrick said. “The promise of telemedicine holds for underserved populations, but I still think people will want the traditional visit where they can go sit in front of a provider and have a physical exam.”